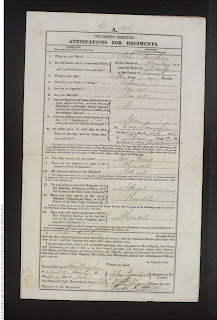 John Armstead enlisted with the 56th Regiment of Foot at Bury in Lancashire on the 2nd July 1846 at eleven o'clock in the morning.  He received a bounty of four pounds. The 56th (West Essex) Regiment of Foot was surely not a natural choice for a Lancastrian. 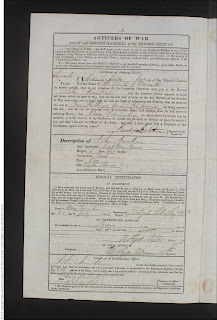 John was just under five feet, six and a half inches tall and apparently in good health.﻿ 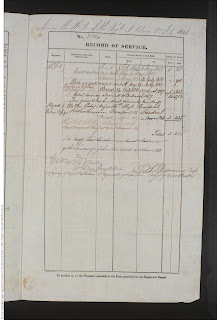 He served over 14 years in the army.  (Discharge papers, not shown here, reveal that he served four years and seven months in Gibraltar, three years and 10 months in Bermuda, one year in the Crimea, and two years and ten months in the east Indies). He was discharged at Calcutta on the 1st October 1860 with two good conduct badges, the Crimean Medal with "Sebastopol" clasp, and the Turkish Crimea medal. 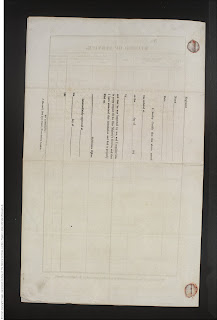 John Armstead's record survives in the very wonderful WO 131 series (soldiers awarded deferred pensions) at the National Archives which has just been published by Findmypast.  Images shown here are Crown Copyright.
﻿ 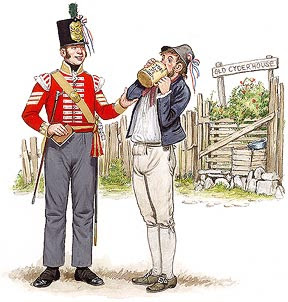 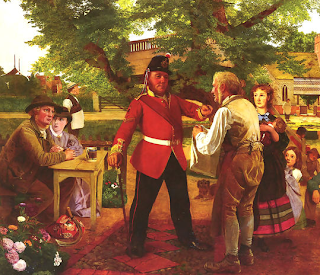 This detail above is taken from a painting by John Mulcaster Carrick and dates to 1862. 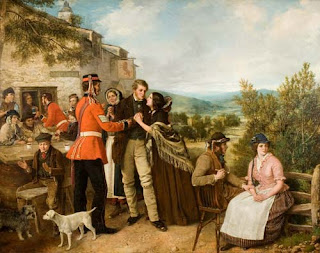 This painting, artist unknown, probably dates to later than the Carrick painting and again, the sergeant's ribbons are clearly visible. 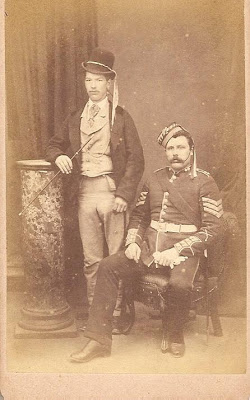 Finally, the photograph above was published by Coldstream on the Gentleman's Military Interest Club forum in 2010 and depicts a recruiting sergeant from the Coldstream Guards and possibly the civilian recruiting agent standing by his side.

Military Service and Pension records can be searched and downloaded from Ancestry and Findmypast. Both companies offer FREE 14-day trials. 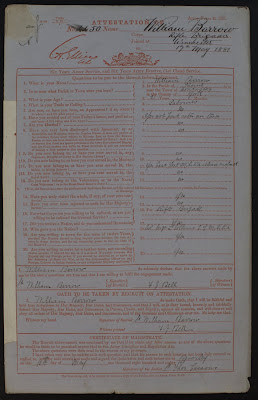 Army Form B.265 was introduced in October 1880 with an initial print-run of 25,000 copies.  It was a short service attestation form, the recruit being asked:

"Are you willing to serve for the term of twelve Years, provided her majesty should so long require your services, the first six years in army service, and the six remaining years in the 1st Class of the Reserve?"

William Barrow answered "Yes" to this question when he joined the Rifle Brigade on the 10th May 1881 although had he but known it, the form he was signing up on had already been superceded by a second version which was published in a short print run of 2000 in March 1881.  In fact, there would be many versions of this attestation form over the coming years and B.265 was an enduring attestation form which would be used  - in various iterations - certainly into the First World War. 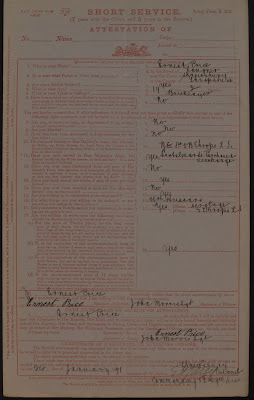 Army Form B111 was introduced - probably in a hurry - in December 1899 with an initial print run of 80,000 forms. It was aimed at members of the Volunteer Force and specifically for the war in South Africa.

Volunteers were to enlist for "a term of one year, unless the war in South Africa lasts longer than one year, in which case you may be detained until the War is over."

The man I have featured on this blog post - Hugh Amass Bothwell - had formerly served with the 1st Volunteer Battalion, Suffolk Regiment and was attested into the regular army, using the newly introduced AF B.111 on the 17th January 1900. 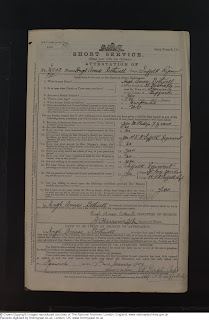 It is interesting to note that Hugh was 20 years old when he attested and yet had already served as an apprentice for seven years. 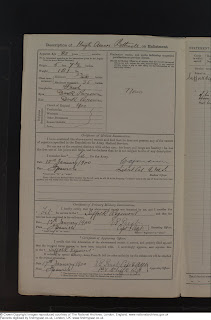 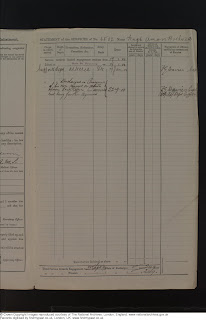 Hugh was discharged at his own request after just eight months' service. 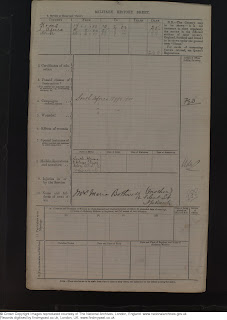 Hugh's service in South Africa was recognised by the award of the Queen's South Africa Medal and three clasps: Cape Colony, Orange Free State and Transvaal. 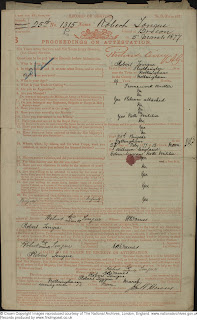 Robert Tongue, a framework knitter by trade, attested with the 25th Infantry Brigade at Nottingham on the 1st March 1877.  ﻿He was 19 years old and indicated that he previously served with the Nottinghamshire militia; indeed it was Colour Sergeant William England of the Notts Militia who had enlisted him. 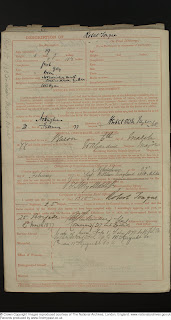 Robert Tongue was transferred to the army reserve on the 21st June 1883 and discharged from the army on 28th February 1889.  He had married in 1884 and the couple had nine children, the first five of these children, all girls, dying in childhood.  The eldest of the couple's two boys, John George Tongue, would later die of wounds (29th March 1918) whilst serving with the 16th Battalion, Lancashire Fusiliers. By then, his father, had also died.  Robert Tongue died on the 29th January 1918 and was buried in a pauper's grave in the Shaw Street Cemetery in Ruddington.  Coincidentally, two other Rorke's Drift men, Caleb Wood and James Marshall, are also buried there.
All document images reproduced on this post are Crown Copyright, The National Archives. Pension records can be searched and downloaded from Findmypast which offers a FREE 14-day trial.
Posted by Paul Nixon at 17:13 No comments: 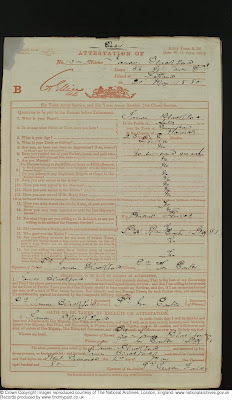 Here's Army Form B.96 (late W.O. [War Office] Form 497); the attestation form used to attest soldiers enlisting for six years with the colours and six years on the army reserve.

The soldier in question, James Blackford, enlisted with the 56th Regiment of Foot (later The Essex Regiment) at Portland, West Bromwich on the 19th May 1880. The document has the word "copy" written acros the top of it and in fact this would not have been the attestation form version that would have been used for James. Look at the top left of the document and there's a date there: 9-80 (September 1880), whereas James actually joined in May 1880.

Other points to note: The printed signature next to the royal cypher reads C Ellice AG.  This is General Sir Charles Ellice who was Adjutant General between 1876 and 1882. 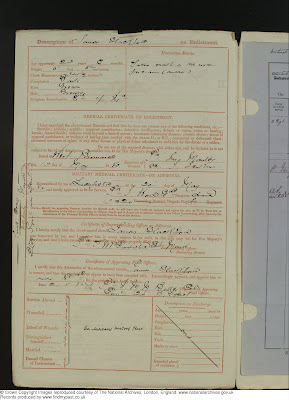 Note that in common with the 1846 attestation I wrote about earlier, the surgeon was supposed to check that the Recruit was free from a whole host of conditions, here listed as: "scrofula﻿; phthisis; syphilis, impaired constitution; defective intelligence; defects of vision, voice, or hearing; hernia; haemorrhoids; varicose veins beyond a limited extent; inveterate cutaneous disease, chronic ulcers; traces of corporal punishment, or evidence of having been marked with the letters D or BC; contracted or deformed chest; abnormal curvature of the spine; or any other disease or physical effect calculated to unfit him for the duties of a soldier."

The letter D stood for Deserter, and BC for Bad Character; these initials branded on the skin. 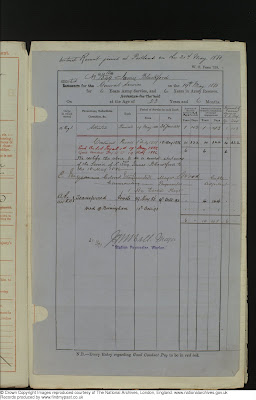 He appears to have been a good soldier, earning two pay rises and being transferred to the Army Reserve on the 19th May 1886, six years after enlisting.  A note at the bottom of his record records that he died at Birmingham on the 10th October 1890. 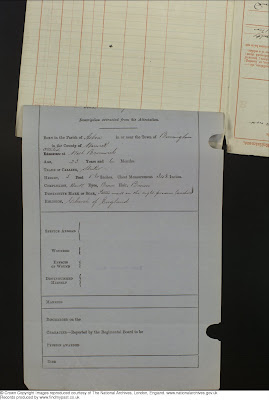 The physical characteristics of the soldier, as well as his trade: a striker.﻿ 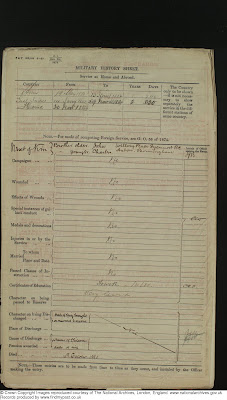 Where he served: three years at home and three years overseas.  Next of kin details are recorded, his character noted as Very Good and again, the date of death recorded.﻿ 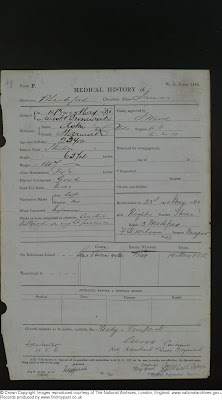 More medical notes.  The day before his transfer to the Army Reserve his character was noted as Steady and Temperate. 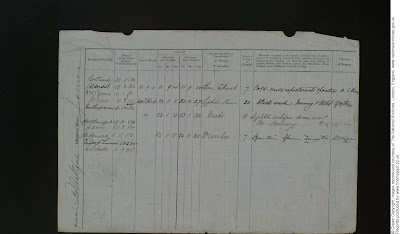 Two cases of syphillis recorded, presumably picked up when he was in India. 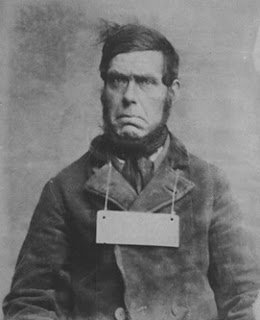 Thomas Carpenter attested with the 40th Regiment of Foot at 2pm on the 18th December 1846 although this photo of him was taken many years later in March 1873 when he presented at Aylesbury Gaol to serve a sentence of one month's imprisonment for stealing a pair of boots.  He was then a 52 year old widower "on the tramp"; a fitter's labourer by trade and the father of two children aged 18 and 20.

Prison records note that Thomas served five years with the 40th Foot, although surviving papers in WO 97 at The National Archives (and published below) show that he actually served less than four years: three years and 270 days to be precise. 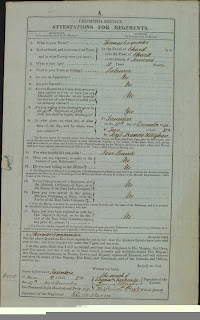 Thomas, born at Chard in Somerset, enlisted at Taunton aged 18 years.  A labourer by trade, he stood five feet, six and three quarter inches tall, had a fresh complexion, grey eyes and brown hair.  He had a cut on his left cheek. 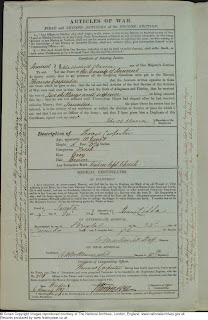 Commentary written along the right hand margin of the second page of his attestation paper (above) read: "a generally ill-formed Recruit - narrow chest, attenuated limbs, flat feet, very long fingers and a highly scrophulous subject - at present suffering from cough likely soon to form a casualty from phthisis pulmonatis." Nevertheless, he was passed medically fit on the 19th December and was finally approved on the 6th January 1847. 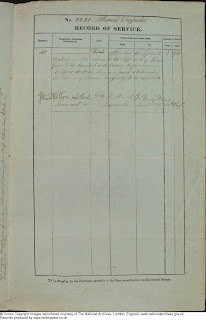 The attestation form itself gives no indication when it first came into use, although the format and order of the first six questions would barely change over the next eighty years.  Question 10 notes that he enlisted for a bounty of four pounds - quite a tidy sum in 1846 - and that he had received the sum of two shillings and sixpence (page two).  It is also interesting to note the wording used in the declaration to be signed by the doctor.  This was a period of history when army deserters, once apprehended, were branded with the letter D and this is referenced here.

In passing Thomas medically fit, the surgeon acknowledged that his "general appearance [was] healthy" although he clearly had misgivings about this and wrote as much in the margin on the left-hand side, stating that the opinion of a Medical Board would go against him.  If nothing else, this man's attestation shows how desperate the army was to recruit men, paying a large sum of money for somebody who was actually a poor specimen.  No reason for Thomas Carpenter's discharge on the 14th September 1850 is given.