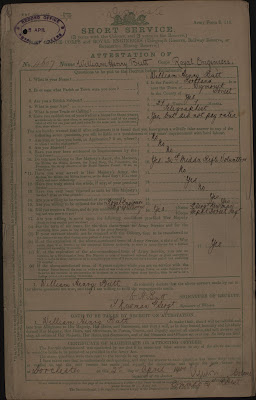 You don't see this form every day, although judging by the date at the top, it had probably been in circulation for a while. This particular attestation paper dates to 1897 and a print-run of 1000 of which this particular form was the eighth version.

The man concerned was 4607 William Henry Butt, a 27-year-old telegraphist by trade who would go on to extend his service to 12 years and finally get discharged in 1912. Two years later he would be back in uniform, still with the Royal Engineers, and earning the 1914 Star, British War and Victory Medals and Medaille Militaire to add to his Boer War pair. I bought some of these medals at auction last week.
Posted by Paul Nixon at 12:55 No comments: