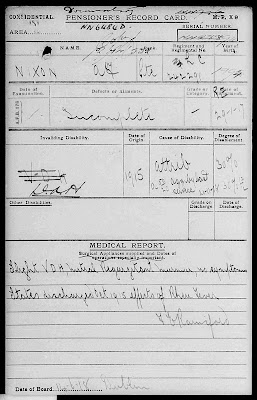 This document is commonly seen in soldiers' files in series WO 364 (Soldiers' pensions from the First World War). It's a Ministry of Pensions' form rather than an Army Form, as such, hence the MP title. In the absence of other documents though - or read alongside a partial service history - it can provide useful information such as the year of birth, date of enlistment and degree of disablement.

In this particular case, the date of enlistment is noted as a date of re-enlistment because Arthur Nixon (no relation) had originally enlisted for four years with the 7th Battalion Northumberland Fusiliers. That was in 1912 and he'd served in the UK until March 1916. In this man's case, only this Ministry of Pensions card and his original four-page attestation survive and so this card is useful in that indicates subsequent service with the Labour Corps and records that his degree of disablement - aggravated by war service - was still at 20 per cent in 1921. 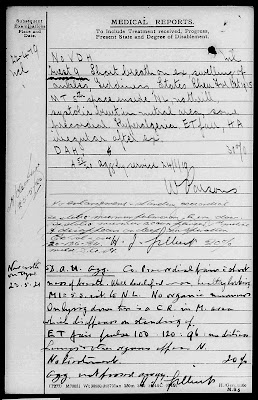 The images on this post are Crown Copyright, The National Archives.
Posted by Paul Nixon at 06:38 No comments: 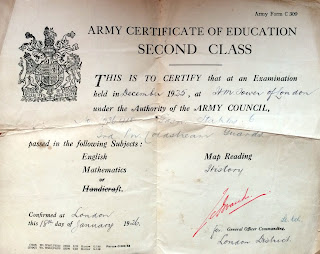 Here's another example of an Army Certificate of Education, 2nd Class; not the most pristine example, to be sure, but it's good enough. This one was issued to a Coldstream Guardsman in 1926 after he'd passed in English, Maths, Map Reading and History. I am unsure whether "Handicraft" was permanently struck off this particular certificate or just in this guardsman's case. In any event, history strikes me as being a far more entertaining subject than handicraft.

The detail in the bottom left of this document notes that this form was part of a print run of 25,000 in February 1923.