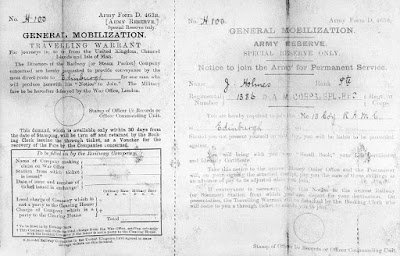 Here's an interesting document dating to August 1914. How many times have we read about the procedures for mobilization; the notices displayed in towns and villages as well as those issued to the men themselves along with travel warrants?
Well here's just such a notice and a warrant, in this case issued to a man of the Special Reserve. The document informs the man that he is to present at Edinburgh on 5th August 1914 and to bring with him his "Small Book", Life Certificate and Identity Certificate. It continues,
"Take this notice to the nearest Money Order Office and the Postmaster will, on your signing the attached receipt, pay you the sum of three shillings as an advance of pay to be adjusted when you join."
If the man needed to travel by train to his place of assembly, the left hand portion of the form has this covered as it is a travel warrant granting the man free travel to or from the United Kingdom, Channel Islands and Isle of Man. The Railway Company would, in time, claim the fare back from the War Office.
This form was to be issued to men of the Special Reserve and there was presumably an almost identical form which was used for men of the Army Reserve; possibly - and I'm guessing here - Army Form B.463A.
Posted by Paul Nixon at 21:08