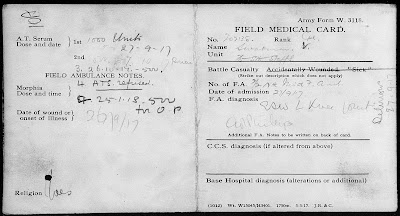 This Field Medical Card, officially Army Form W.3118, is uncommonly seen in surviving service records. It would have been completed when a man was admitted as a casualty to a Field Ambulance and would have accompanied him on his journey to the casualty clearing station and then base hospital - if he made it that far. 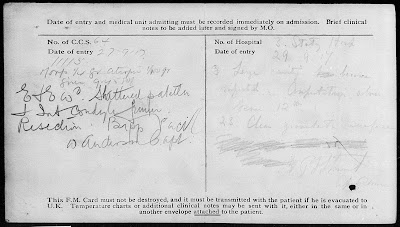 This particular card was part of a run printed in March 1917 and started its particular journey in September 1917 when Corporal Vernon Swatman of the 2/5th South Staffordshire Regiment was admitted to the 2/2nd North Midland Field Ambulance as a battle casualty with a smashed kneecap.

The images on this blog post are Crown Copyright The National Archives.