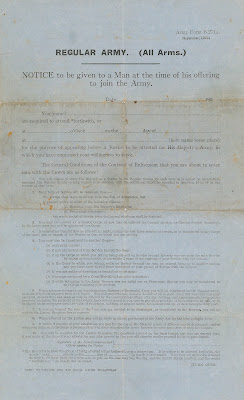 This attestation form which, so it says at the top, came into effect from September 1921, marks quite a departure from those attestation forms used prior to this date. For a start, this is a two-page document rather than a three or four-page form, and of these two pages, the first page is almost entirely given over to the conditions; the "contract" of enlistment between the man and the "Crown". 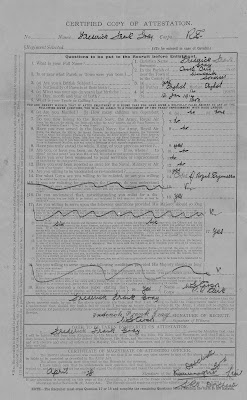 Page two asks for some new information but there is also a lot missing. The nationality of the recruit's parents is requested, as is the recruit's date of birth and number of dependent children. Missing from this form though are next of kin details, marriage details, children's birth details and a physical description on enlistment.

Also, noticably missing from this 14-year-old's paper is his regimental number which would normally have been applied when he presented himself at the regimental depot. It makes me wonder whether this lad did actually see the attestation through.

My grateful thanks to Graham Thompson for sending this form to me. This particular issue dates to June 1927 and was obviously still in use when Frederick Gray signed up in April 1928.