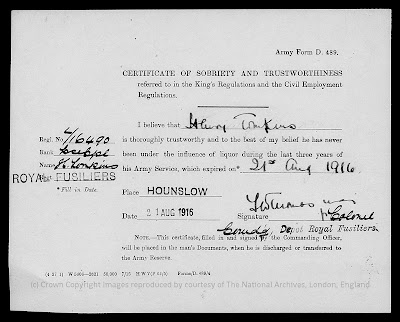 This documents is very much of its era. Even contemplating issuing such a form these days would no doubt be seen as an infringement of human rights. However, back in 1915 when this form was issued, it would have been perfectly reasonable for an employer to request this evidence particularly, it has to be said, in the light of the British soldier's fondness for alcohol.

In this case however, Henry Tomkins, already a veteran of Gallipoli and the Somme, was still only 16-years-old when this form was completed. He was pulled out of the army at the request of his mother who had already seen Henry's twin brother William killed in April 1916. Henry would later join the Royal Navy and end his naval career as a stoker petty officer.

You can read more about Henry Tomkin's military service on my World War One veterans' blog. Henry's army record and navy record both survive in WO 364 and ADM 188 respectively and both can be viewed on Findmypast. Henry's army record is particularly interesting as it contains much correspondence from his mother - as well as this quaint document.

The image on this page is Crown Copyright, The National Archives.